Well, Bucket turns 1 tomorrow ... CRAZY!!! But, we had his birthday party on Saturday. The hubs is a MAJOR Superman fan so we decided to have a Superman theme. It was nice because we have TONS of Superman paraphernalia ... I'm not kidding :) I asked each party guest to wear a Superman shirt or hat or whatever else they could find or already had. Bucket already has 2 superman shirts, but I wanted to make him one. 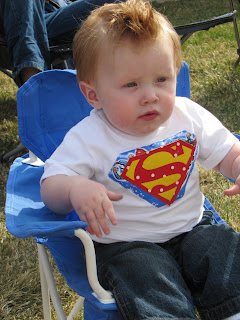 This is the front of the shirt. It was my first time making an applique and it was super easy!! I actually used my Cricut to cut out all the pieces, it made it SOOO easy!! The Superman cartridge is awesome and I'm so glad that I bought it. 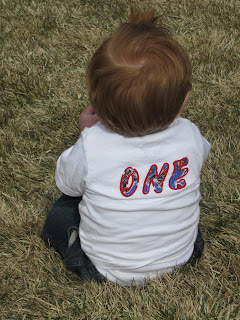 This is the back of the shirt, the cartridge also come with a fun Superhero comicbook font so I cut these letters out for the back of the shirt. I used heat-n-bond lite for all the pieces and then stitched them on. Stitching them on was kinda tedious because of the turns but as long as I went slowly it wasn't too bad. I used Fray-Check on the edges to help them from fraying during washing. 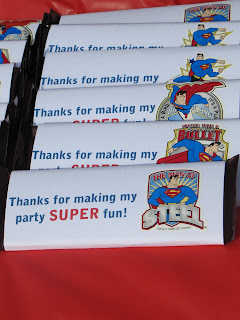 I wasn't going to do a party favor since that most of the guests were family but last minute I decided to whip something up. I printed "Thanks for making my party SUPER fun!" I slapped a Superman sticker on then wrapped them around a Hershey bar. They took 5 minutes and I really like how they turned out!! 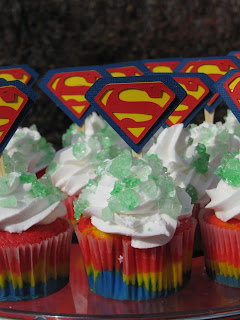 Ok, these Cupcakes turned out FABULOUS!!! I got the recipe here and they turned out better than I imagined!! They even taste great!! She also has a cupcake frosting recipe, here, I tried it but I wasn't totally happy with the results. At first it tasted like butter, so I added more vanilla and then it just tasted like fresh whipped cream. And it was rather melty, so I just went to the grocery store and bought 2 lbs of Buttercream from the bakery :) I think from now on I will just buy it from them. It's only $3.99/lb and it saves me from having to make it. Anyway, I bought some green rock candy suckers and crushed them on and sprinkled them on the top and called them Kryptonite chunks. The little Superman symbol picks were also made with the Cricut then I just glued them onto some party picks and stuck 'em in. 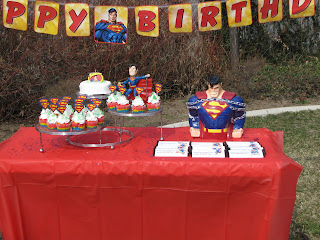 I also made a little 6 in round cake for Bucket to dig into. This is how I displayed the cupcakes and the favors!! 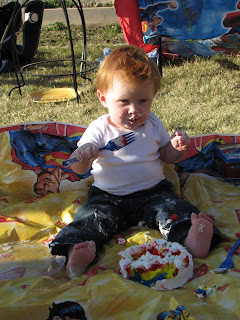 Here he is eating his cake ... it took him a minute to realize that he could eat it all, he was picking off the Kryptonite chunks individually. I kinda had to stick his hand into the cake and then he was off. He even used a fork and did quite well.

Now that the party is over and we are moved in I have to come up with a project for tomorrow's party ... oh boy, I have NO idea what I'm going to do. I'm off to craft, see you soon!!
Posted by Jessica @ Me and My Bucket

Thanks for stopping by and taking the time to leave some love!!